Bought with Blood and Sacrifice 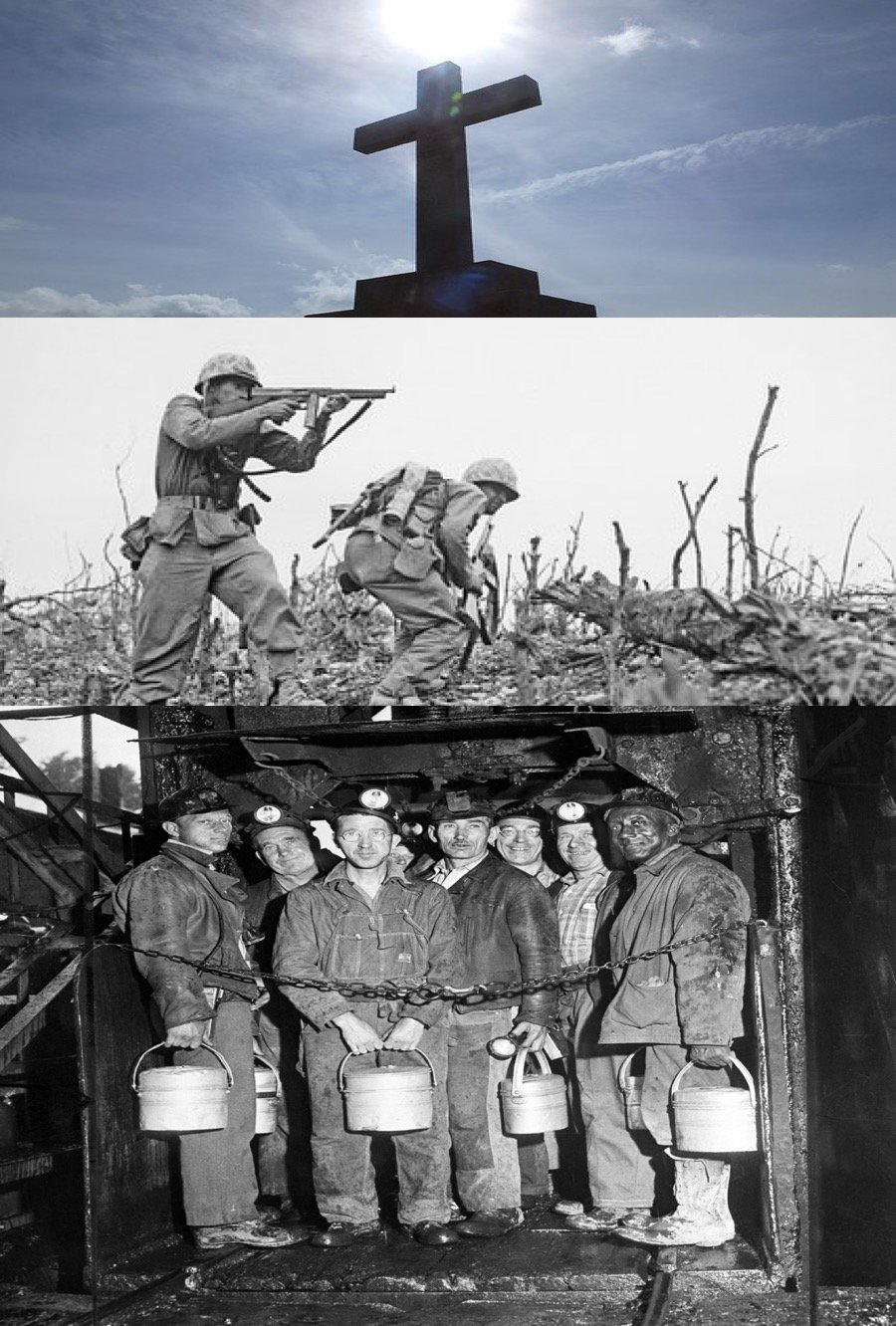 BOUGHT WITH BLOOD AND SACRIFICE

The Sacrifice has been Made:

Everything of real value that we have in this country was bought with blood and sacrifice.  I am a Christian, therefore I believe that my salvation and my life itself was made possible and bought with the blood of our Lord and Savior Jesus Christ.  Of course, we are all aware of the countless men and women that have fallen on our country’s battlefields or made untold other sacrifices throughout our nation’s history to save our precious democracy and freedom.  We have heard and admire greatly the selfless actions of the Greatest Generation, that group of Americans that defeated Hitler and fascism in World War II, and communism in the Cold War.  But that generation also made another major sacrifice that often is not mentioned but nonetheless was and is essential to our country’s greatness and morality.  The Greatest Generation was pivotal in creating the middle class in our nation.  After coming home from brutal combat in European and Pacific theatres and making severe personal sacrifice on the home front to make victory possible, this generation decided that they had put their lives on the line and paid the price for their country, and their country was going to treat them well.  They determined that they would be paid a decent wage for their work, and that they and their families would share fairly in the growing prosperity of the nation.  But it did not come without a serious fight.  The great majority of companies then, just like now, would not pay their employees a decent wage simply because it was the right thing to do. Therefore, they organized trade unions, manned picket lines, and went on strike.  And they met with resounding success.  This was the generation that endured the deprivation of the Great Depression, went face to face with German Tiger tanks, battled in the skies over Nazi occupied Europe, suffered the desperate attacks of Japanese Kamikazes, and raised the flag at Iowa Jima.  They watched their buddies die and be maimed by the hundreds, suffered the constant horror of close combat, and knew the anxiety and deprivation that their loved ones at home endured.  Do you really think that company thugs and selfish corporate interests would persevere and be successful against men and woman of this strength and character?  Not a chance.  They won their fight for fair wages, affordable healthcare, and quality retirement benefits.  Their determination and political influence elected leaders, primarily Democratic, who championed policies that benefited working Americans such as worker’s compensation, the minimum wage, and overtime pay.  And the efforts of organized labor set a standard that even lifted up the pay and benefits of non-union employees.  They quite simply created the middle class in our nation, and the American Dream for millions of us.  The middle class in turn made our country just, provided the jet fuel for unparalleled growth in our economy, gave our children boundless optimism for the future, and provided a tax base that funded quality education, built countless highways, airports, and other infrastructure, and supported the strongest military the world had ever seen.  The generations that followed likewise worked to defend and sustain the middle class and made their own supreme sacrifices for their country in the frozen mountains of Korea, and the steamy jungles of Vietnam.

The Degradation of the Middle Class:

Beginning about 40 years ago however, a change began to occur.  Perhaps Americans simply became complacent or overly confident in believing that the promises of the middle class and the American Dream would always be there for themselves and their children.  But that was not the case.  Politicians began chipping away at the policies that underpinned our middle class and worker’s ability to make a decent living.  Unions were weakened considerably, the minimum wage was rarely raised, tax laws were dramatically changed to favor the wealthy and corporations, legislatures and judges began to champion the interests of businesses over those of employees.  These changes had a dramatic effect and it has only gotten worse in the last decade.  Most American employees when adjusted for inflation, now have not had a significant pay raise in the last 40 years.  Businesses have scaled back on pensions and contributions to retirement plans to the point where a large majority of Americans, even those nearing their golden years, do not have savings even close to being sufficient for their retirement.  Tuition and healthcare costs are outrageous, and many don’t even have decent access to medical treatment.  This degradation of our middle class has been spearheaded by Republicans with their “trickle down” economic policies and pandering to big businesses and campaign contributors, but too often over the years Democratic lawmakers have been complicit also or just not fought hard enough for working people.

Time to Fight for the Middle Class once Again:

But here’s the deal.  We know now that a middle-class lifestyle is not a birthright, it must be protected and fought for by each generation.  But we also know that it is our heritage and that the generations of today are as worthy as any generation that has come before us.  The people that established the middle class were our fore-fathers and mothers and they did not make the sacrifice for themselves only but also for their children and grandchildren.  Our generation has paid the cost also, on the bloody battlefields of Afghanistan and the Middle East and our servicemen and woman are as dedicated and worthy as any in the history of our country.  It is time now to stand up for our heritage and to stop the degradation of the middle class.  It is time for direct, real wage increases, for affordable, quality healthcare for all pre-existing condition or not, to have the money to invest in education, infrastructure, and national defense, and to not just keep social security from failing, but to make it robust again and to increase retirement benefits for our seniors now and in the future.  These things are not impossible – in fact they are quite doable if we actually care about people and pass fair wage and fair tax policies.  They are the policies that will allow our country and economy to prosper and give ourselves and our children true optimism for the future.  Let’s work together to get it done!  Let’s restore the American Dream for all Americans once again.

“The middle class is our heritage but not a birthright.  It must be fought for by each generation.  Americans of today are as worthy as any that came before them.  Time to fight for the middle class and the American dream once again”.

A National Wage Increase
Teachers and Other Workers - Do You Ever Want Real Raises and Benefits Again? Then Fight the Race to the Bottom! Here's How:
The Great Republican Social Security Farce